Exercise this week: daily dog-walk; Thursday, weights and CV circuit; (and I haven’t had time to go to the gym as I’ve been rushing round sorting out stuff including my physio appointment)

What worked well/tip of the week: plan everything!

Bits where I had to think: Tricky Christmas entertaining! I planned in advance for lunch out on Friday but we were shocked to discover there wasn’t a proper Christmas dinner as there usually was – so we ended up having afternoon tea instead, which was a bit harder on my budget. I’d already planned a low-point breakfast and soup for dinner, which kept me on track. For Saturday, I planned Christmas dinner so I could still have two cocktail sausages wrapped in bacon, just one roast potato, and a pudding of raspberries and Skyr (instead of salted caramel ice cream – we don’t do Christmas pudding in this house) so I could have cheese. I also discovered that Tiptree raspberry gin is very nice (and one pub measure equates to half a glass of red wine…)

What needs to change next week: try to fit in more gym days – going to be hard, though, with physio appointments (knee) and a gig. That’s going to be tricky because it means eating in a service station on the way to Birmingham (so I’ll be studying the Starbucks menu) and fast food at the concert hall. So I need to plan it. (And I have Christmas lunch out this week, too…)

Mindset: pleased with the results so am keeping going

Favourite/new recipe this week: Caponata sauce – serves 3-4 (partly based on the recipe from Smyth & Deli-cious; my tweaks are baking the aubergine rather than frying it, and adding some extra veggies and chickpeas because it’s a nice combo and adds protein – could use other pulses; and goes well with chicken or fish or steak for non-veggies) 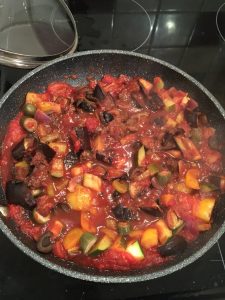 Put the aubergine on a baking tray, mist with oil and roast at 180 degrees C for 20 mins.

Mist a pan with oil spray, saute onion and garlic for 3 mins, then add the rest of the ingredients except the chickpeas and pomegranate molasses, bring to the boil, then cover and simmer for 20 mins. (Keep an eye on it as you might need to add a little water.)

Add the pomegranate molasses and chickpeas and simmer for another 10 mins. (You can leave them out – I just like to add protein for the house vegan! Pic above is just before I added the chickpeas.)

Serve with pasta (also works with a baked potato, couscous, rice or bread; or as a side dish with grilled tuna/chicken/whatever; and it’s nice cold as part of a platter with artichokes, more olives, etc etc).

2 thoughts on “The Unlardy Project – end of week 4”