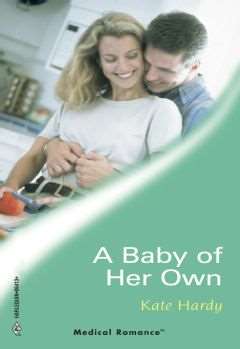 Will she ever be a mum?

Jodie Price spends Christmas in bed with her broodingly good-looking boss – consultant paediatrician Sam Taylor! It seems to be the start of something special – until Sam tells her he’s infertile…

Sam knows that Jodie loves kids – she’s fantastic with the children on the ward and he knows she wants a baby of her own one day. A baby he can’t give her. It seems an impossible situation – unless Jodie can convince Sam that her love for him is stronger than her desire for a child…

Behind the Book
The book was inspired by my daughter’s spell in hospital with bronchiolitis, aged 6 weeks – and Sam’s reserve probably owes a lot to Anton Meyer in Holby City, which I loved watching at the time.)

‘Melbury’ is actually Norwich, Norfolk – before the new hospital was built just outside the city. The old hospital is currently being turned into flats. I’m very much inspired by the here-and-now and adore where I live.

It’s dedicated to my husband and children.

Madge, the ward orderly in the book, makes fabulous cheese straws. They’re actually ones my mum used to make (known as cheese stars) and are demanded by my family at every party. Be warned, they’re very moreish. (And we don’t talk about the calories or saturated fat content!)

CHAPTER ONE
‘Incey wincey spider climbed up Amy’s arch; down he came, to make our Amy laugh!’

Sam Taylor stopped dead in his tracks. He knew that voice, and it shouldn’t have been singing nursery songs. He strode to the doorway of the small room – a room that was really a quarter of one of the bays in the paediatric ward, partitioned off to give more flexibility when it came to isolation nursing or a parent needing privacy – and leaned on the jamb, watching the young doctor who was playing her own version of Incey Wincey Spider with the toddler in traction on the cot, wiggling her fingers up the traction arch and then letting them drop down onto the little girl’s tummy.

Her blonde curls cascaded over her shoulders, hiding her face from Sam’s view, but he had no doubt she was smiling. Just like the red-headed toddler lying on the iron-framed cot in front of her, flat on her back with both legs in plaster. The ties that bound the child’s legs to the traction arch were gradually moved lower and lower down the arch so her hip joints were pushed back into their proper place as her legs stretched out.

Why was his registrar playing with a sick child when there were notes to be written up and a ward round to finish? Particularly when they were so short-staffed, thanks to the virus that had decimated the ward. Playing was fine in its place, but they just didn’t have time for it right now.

He cleared his throat. ‘Dr Price. A word, please?’

She looked up instantly and her green eyes widened as she saw the grim expression on his face. ‘Of course, Mr Taylor.’ Jodie gave the consultant a brief nod, then turned back to the little girl. ‘I’ll see you tomorrow, Amy.’ She gently touched the tip of the child’s nose, the gesture telling in its affection. ‘Big smile?’

‘Yes, Doc-a Dodo,’ the little girl lisped, doing her best to give Jodie a smile, though clearly disappointed that she was going to lose her playmate.

Satisfied that the child was happy to be left, Jodie joined Sam at the door.

‘There’s still half a round to do,’ he pointed out tightly.’I know.’

His steel-grey eyes narrowed. She knew, and she was leaving all the work to others? ‘And you’re playing with Amy Simcox.’

She nodded, seemingly unconcerned. ‘Apart from the fact that plenty of studies show how play helps children to recover faster, it’s my day off.’

Sam flushed at the double rebuke. ‘I see. Well, I’m sorry, Dr Price. Though if you wore a white coat like the rest of us,’ he continued, his voice very soft and very dangerous, ‘maybe it would be easier to tell when you’re off duty.’

It was her turn to redden, now; with her fair skin, she flushed spectacularly. Literally to the roots of her hair. ‘In my experience, small children are scared enough when they come into hospital. A white coat’s just another barrier for the kids and their parents to overcome.’

‘And how do the parents know you’re who you say you are?’ he countered silkily. ‘Anyone could walk around here with a stethoscope slung round their neck and a clipboard under one arm -‘ just as she casually floated round the ward ‘- and say they’re a doctor.’

‘True.’ She gave him an impish grin that riled him even more. ‘But they don’t have one of these.’ She fished her hospital ID badge out of the pocket of her trousers.

He ought to remind her of her position as a junior doctor, Sam knew, but a glint in her eyes warned him she was expecting something of the sort. He couldn’t be more than six or seven years older than she was, but she made him feel as if there was a whole generation between them.

‘So what are you doing here on your day off?’ he asked. ‘Showing your dedication to the ward?’ Hoping for a quick promotion, perhaps? Though that was unfair. She didn’t seem the type to trample on others on her way to the top. Her dedication and enthusiasm were without question, yet Jodie Price always had time for people.

‘Actually, I’m just playing with little Amy.’ She bit her lip. ‘Poor kid. As if it isn’t bad enough being in traction at the age of eighteen months, just when she’s getting used to walking, it’s made worse by her father being “too busy” to visit her and her mother bursting into tears every time she sees the little one.’

‘And?’ he prompted, seeing the glint of tears rather than defiance in her eyes. Doctors were taught from the word go not to let themselves get so emotionally involved that it affected their judgement – but sometimes a case really tugged at your heartstrings and you forgot to be sensible.

‘Her mother’s convinced it’s all her fault that Amy’s hip joints haven’t formed properly. She had three glasses of champagne on her wedding anniversary, when she was pregnant.’ Jodie grimaced. ‘I’ve told her it’s not her fault, that clicky hip’s fairly common in babies who were breech presentation, particularly girls. It should have been picked up even before Amy’s six-week check, anyway, rather than Mrs Simcox asking her health visitor why Amy wasn’t walking at sixteen months when all her peers were, then us finding out at referral that the baby had clicky hip. But she still blames herself, so little Amy doesn’t get many visitors.

‘I’m not saying her parents should live here,’ she said, lifting a hand to forestall any comment he might make. ‘Parents who stay during the day need to go home at night for a proper rest – which they wouldn’t get here, with monitors beeping all over the place. But I do think that a child who’s stuck in one place and is old enough to talk needs a bit of company. The nurses are brilliant with her but they’re overstretched.’ The generous mouth thinned. ‘So I’ve just been spending a few minutes talking to her and playing with her in my lunch-hour or before I go on duty.’

‘And you do that for all your patients?’

Jodie lifted her chin, and Sam realised for the first time that she was only a couple of inches shorter than he was. Around five feet ten in the flat shoes she was wearing.

‘For the ones in need, yes,’ she stated defiantly.

‘It can’t go down very well with your boyfriend.’ Why on earth had he said that?

She coloured. ‘No. It didn’t. Still, you have your round to finish, Mr Taylor. I won’t hold you up any longer.’

It didn’t. Meaning the boyfriend was history? He suddenly realised she was staring at him, expecting an answer. ‘Oh. Yes. Goodnight, Dr Price.’

Sam continued on his rounds, carefully writing up his notes on each case, but he couldn’t shake the image of the fair-haired junior doctor from his mind. Crazy. Even if he was interested in another relationship – and his marriage to Angela had put him off that idea for good – it wouldn’t be with Jodie. Being the subject of the hospital grapevine wasn’t something he wanted to repeat. He’d been there, done that and worn the T-shirt when Angela had left him for another man.

Besides, Jodie really wasn’t his type. Casual, breezy, and way too confident for a young doctor in her position. She still had a lot to learn, about life as well as medicine.

No buts, he told himself firmly. He didn’t even want to be her friend, let alone anything else.

So why ask her about her boyfriend, then? a little voice in his head queried wickedly.

Slip of the tongue.

Freudian slip, more like, the voice continued. She’s beautiful, clever, fun. And you want to –

He forced himself to concentrate on his rounds; then, just as he was about to leave the ward, he heard her laugh. A laugh that made him yearn, for a brief second, to have been the one who’d put a smile on her face.