Like many middle-aged women, despite my daily dog-walk and my gym sessions (which I admit have been very slack this year), I’m suffering from spread. Well, no – I’ve always been on the chunky side. About the only time I was thin was the worst year of my life, when my mum died. And I don’t actually want to be *thin* – I want to be a healthy weight and shape.

I do eat healthily, most of the time (a lot of my talk about cake is teasing – unless it happens to be birthday celebrations which stretch a bit too far). But the weight’s been creeping up again this year (partly to do with not showing my face enough at the gym). And it’s time I took care of myself. It’s time to admit that I need the accountability of having someone else weigh me and look over what I eat. I do have a slow metabolism (not a weak excuse – the Fitbit backs me up because on a desk-day when I don’t move anywhere near enough, I don’t even get to the 2000 calories an average woman burns). So I need to factor that in. I’m probably in a food rut and switching away from calories to a different form of counting will make me more mindful about what I choose to eat instead of being so familiar with it that I’m not thinking or keeping an eye on portion-creep.

I’m a foodie, so any programme that makes me live off shakes/bars or eat tinned (canned) food is not OK by me. I can’t do 5:2 because I am HORRIBLE if I’m hungry (everyone else in the house says they’ll move out if I ever do that again). I love experimenting with recipes. So what I want is something flexible that will let me eat half the week with my vegan daughter and half the week with my omnivore husband (and son, when he’s home from uni). My lot are a bit fussy so I’ve always tweaked meals and served different things to different people at dinner (eg spaghetti bolognese was normal for husband, wedges instead of pasta for son, different sauce for daughter, and extra veggies in my sauce). I don’t mind tweaking things. What’s important is sitting down together for a meal (I am also the tech police, so it’s no tech at the table unless there is a *very* good reason).

Friends have had good success on WeightWatchers and Slimming World, so I looked at both programmes to see which would suit me best. I opted for WW as I think I need the discipline and accountability of weekly weigh-ins, and also it’s slightly more structured than SW (I have a problem with carbs – letting me eat as much pasta as I like will not end well, whereas measuring a portion means I won’t feel deprived but I also will see results). With the points system, I can go out for dinner and enjoy it – and plan it in so it doesn’t push me off target. It helps that one of my writer mates happens to be a WW coach; I know she’ll be firm and kind, which is a good combination, and she also won’t let me beat myself up when I slip.

I’m adding this into my blog in case it helps others who might be having the same kind of struggle. It isn’t a competition (I want slow, sustainable and maintainable weight loss, and I have sensible goals in mind). It’s about sharing ideas. So my weekly roundup is going to be basically what I’m eating, what exercise I’m doing, and sharing any new-to-me recipe that I’ve really enjoyed. (Anything I post should fit just about any diet, whether you’re counting carbs or calories or fat grams – just chuck it through MyFitnessPal to get the stats.) I’m not posting my actual weight or measurements, though my weekly roundup will include how I’ve done. But I guess I ought to start with Kate Lardy as I look this week (taken in a doorway so I can see the changes as the weeks go on, on the grounds that if I can see a change in shape even if the scales aren’t showing much of a change, that will keep me motivated). 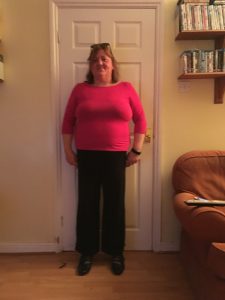 I’ll start with my go-to soup recipe (serves 4) (and this isn’t an entire meal – I normally have a salad or a sandwich to go with it! But I really like soup for lunch in winter – this doesn’t really count as cooking because it is SO easy)

Put everything into a saucepan, simmer for 30 minutes or until all the veg are soft, whizz through a blender until smooth.

You can vary the veg, decide to have it chunky instead of smooth, add a glug of pomegranate molasses for depth, add in a handful of dried red lentils at the start to bulk it out… It’s all about being flexible 🙂

1 thought on “The Unlardy Project – the start”